Battle Of The Barricades: U.S. Marines In The Recapture Of Seoul
(eBook) 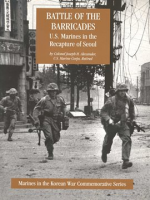