The bridge on the River Kwai
(Blu-ray) 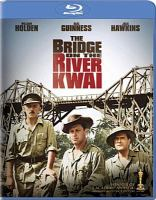