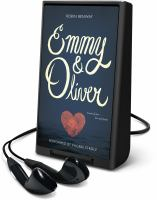 General Note
Title from Playaway label.
General Note
Release date supplied by publisher.
General Note
Originally released by Harper Audio ℗ 2015
General Note
Issued on Playaway, a dedicated audio media player.
General Note
One set of earphones and one AAA battery required for listening.
Participants/Performers
Performed by Phoebe Strole.
Description
Emmy and Oliver were going to be best friends forever, or maybe even more, before their futures were ripped apart. In Emmy's soul, despite the space and time between them, their connection has never been severed. Oliver needs a moment to figure out his heart. He'd thought, all these years, that his dad was the good guy. He never knew that it was his father who had kidnapped him and kept him on the run. Returned to his old hometown, all at once, has his heart racing, and his thoughts swirling.
Local note
PLAYAWAY
Published Reviews
Reviews from GoodReads
Loading GoodReads Reviews.
Citations
APA Citation (style guide)