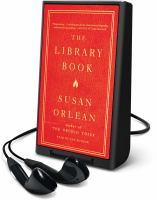 General Note
Title from container.
General Note
"HD."
General Note
"LIGHT."
General Note
"Simon & Schuster Audio."
General Note
Previously released by Simon & Schuster, Inc., ℗2018.
General Note
Release date supplied by publisher.
General Note
Issued on Playaway, a dedicated audio media player.
General Note
One set of earphones and one AAA battery required for listening.
Participants/Performers
Read by the author.
Description
"On the morning of April 28, 1986, a fire alarm sounded in the Los Angeles Public Library. As the moments passed, the patrons and staff who had been cleared out of the building realized this was not the usual false alarm. As one fireman recounted later, "Once that first stack got going, it was 'Goodbye, Charlie.'" The fire was disastrous: it reached 2000 degrees and burned for more than seven hours. By the time it was extinguished, it had consumed four hundred thousand books and damaged seven hundred thousand more. Investigators descended on the scene, but more than thirty years later, the mystery remains: Did someone purposefully set fire to the library -- and, if so, who?"--,Provided by publisher.
Local note
PLAYAWAY