The nightmare before Christmas
(Blu-ray) 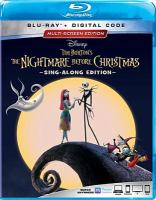