In too deep
(Pre-loaded Audio) 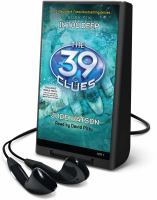 General Note
Title from Playaway label.
General Note
Release date supplied by publisher.
General Note
Previously released by Scholastic Inc., p2009.
General Note
"Scholastic Audiobooks"--Container.
General Note
Issued on Playaway, a dedicated audio media player.
General Note
In container (21 x 13 x 3 cm.).
General Note
One set of earphones and one AAA battery required for playback.
General Note
"Listen to the audio, play the game, win the prizes"--Container.
General Note
"Exclusive bonus track: listen to a revealing interview with Ian and Natalie Kabra's mother!"--Container.
Participants/Performers
Read by David Pittu.
Description
Fourteen-year-old Amy Cahill and her younger brother, Dan, head to the Land Down Under to discover what their own mother and father knew about the hunt for the 39 Clues. But following in their parents' footsteps brings up lost memories for Amy so awful that she can't share them ... even with Dan. Haunted by the ghosts of their past, chased by deadly competitors, Dan and Amy can't see who is an enemy and who is a friend. Their blindness leads to a terrible mistake ... and the death of a hidden ally.
Local note
PLAYAWAY